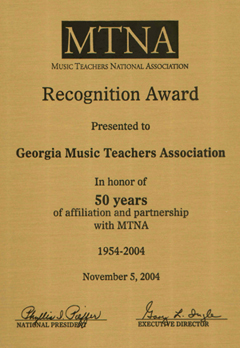 The organizational meeting of Georgia Music Teachers Association took place at a dinner held at the Georgian Hotel in Athens on April 9,1954, with Mr. McDowell presiding as chair of the group. After dinner, the first subject to be dealt with was the adoption of a constitution. The constitution presented was the work of Dr. Barrett Stoup of Louisiana State University, a past president of MTNA. With a number of changes, duly voted upon, the constitution was adopted. The report of the nominating committee announced Mr. Hodgson as the choice for president. Mr. Hodgson, however, refused to allow his name to be placed in nomination. Nominations from the floor followed and Mr. Michael McDowell was elected as GMTA's first state president. 35 teachers were present.

The constitution provided that at least one business meeting must be held each year, either as part of the conference or held separately, and plans were immediately begun to organize a conference. The first annual conference was held in January of 1955 at Agnes Scott College. Without much knowledge and experience for guidance, it is significant that the format of activity was something of a model for later conferences. Registration began at 3:30 on Sunday, January 23, in the lobby of Presser Hall, followed by a reception at 4:00, sponsored by Decatur Music Teachers Association. The day ended with a program of music performed by the Agnes Scott Music Department faculty and the Agnes Scott Glee Club at 5:00 p.m.. On Monday, January 24, the opening session in Maclean Auditorium included a welcome address by Dr. Wallace Alston, president of Agnes Scott College. Guest artists included Dr. Edwin Gerschefski, Beverly Wolff Dwiggins, and Robert Harrison. The conference came to a close with a banquet at the Candler Hotel in Decatur, with the Atlanta Music Teachers Association as sponsors and the Atlanta Symphony String Quartet providing a musical program.

At the MTNA conference held in St. Louis, Missouri during March of 1955, the Southern Division of MTNA was organized. Michael McDowell was elected president and plans were immediately begun for a conference in Atlanta. The conference was held in January of 1956 at the Atlanta Biltmore Hotel. Every effort was made to get GMTA members to attend. At the January 1956 meeting of GMTA, the first of many constitutional amendments was made. Instead of having one vice-president, the amendment called for three vice-presidents: Vice-President of Program, Vice-President of Membership, and Vice-President of Publicity. It was understood from the beginning that the Vice-President of Program was next in succession to the presidency and for many years it was so considered, until the 1970s when the office of President-Elect was instituted. It was also decided at this meeting that a November conference date was preferable to January. This decision has been followed to the present day.

The third conference was held in Columbus in November of 1956, with headquarters at the Ralston Hotel. The fact that two conferences occurred in 1956 was the result of the decision to have annual meetings in November. GMTA began to see early the advantage of holding conferences on college campuses where better facilities, especially pianos, were available and where costs were less. Under the leadership of the new president, William Weaver, Agnes Scott College was chosen as the conference location for 1958, and Wesleyan College was chosen in 1959. It was here that, for the first time, the Georgia Association of Teachers of Singing was invited to hold their annual meetings with GMTA, a custom that has prevailed many times in the intervening years. Louise Harwell had been elected president at the Wesleyan conference but, because she had moved out of state, was unable to serve as president. Her unexpired term was filled by Elizabeth Buday.

The idea of certification of music teachers had been creating a lot of interest in the music field. The subject took concrete form by the joint action of GMTA and GMEA. Those instrumental in drawing up the details of organization were: Jack Broucek, Troupe Harris, Michael McDowell, Despy Karlas and Timothy Miller. The program was known as "Recognition of Merit". The first year of awards was 1963 and a large number of applications were received. 48 Certificates of Merit were awarded that year and 30 the following year.

The 10th anniversary conference was held at the University of Georgia in November of 1963 with Despy Karlas presiding. An interesting part of the program was a lecture-demonstration of Electronic Music by Otto Luening, one of the world-renowned figures in this field. The 12th conference was held as a part of the Southern Division conference at the Dinkler-Plaza Hotel in Atlanta, March 1966. Again, GMTA held a second conference in one year and in 1966, the 13th conference took place at Wesleyan College, with Troupe Harris as president. A constitutional amendment was passed at this conference which included all Local Association presidents on the Executive Committee.

The newly-elected president was Nona Randall, who presided at our 14th conference at Brenau College in November of 1967. Mrs. Randall noted in her remarks at the general session that GMTA had passed the 300-member mark. It should be noted that as early as the GMTA conference in 1957, pre-conference programs by student performers were presented by GMTA. These gave talented students a chance to perform before a critical audience and to let the audience know the kind of teaching that was being done in piano. From these beginnings came the elaborate and comprehensive student performances which have continued for many years. Preliminary auditions are held earlier in the year and a selected group is presented at the conference.

Mrs. Naegeli von Bergen Metcalf was the GMTA State President when the 16th conference was held at Augusta College in November of 1969. It was at an Executive Committee meeting in May 1969 that GMTA authorized a $50 commission, to be matched by an equal amount from MTNA, and it has become a part of most conference programs, known as the GMTA/ MTNA Commissioned Work. At this time there 11 eleven Local Associations in GMTA: Athens, Atlanta, Cobb County, Columbus, Decatur, Rome, Southwest, Statesboro, North DeKalb, Valdosta and the newly-formed Northeast Georgia chapter. A constitutional amendment had been passed which made the auditions chairman a member of the Executive Committee.

The 17th conference in 1970 was held at Valdosta State College with President Eloy Fominaya presiding. The membership at this time stood at 405 regular members and 37 student members. Dr. Fominaya announced that GMTA was now incorporated as an Association. During Dr. Fominaya's second term in office, a constitutional amendment was passed which extended the terms of President, President-Elect, Secretary and Treasurer to two years. The three Vice-President offices remained at one year.

During GMTA's 23rd conference, President Rexford Whiddon paid tribute to past presidents of GMTA, many of whom were present. Each was given a plaque with name and date of presidency. The 24th conference was again at Columbus College in November 1977. President Whiddon announced that the certification program had been enlarged to include certification in nearly all fields of music, very much in the manner of MTNA. With many accomplishments, GMTA was in a good position to face its 25th anniversary and to begin its march toward its 50th.

Because it has never been afraid to try new ideas or to discard old ones which are no longer useful, because it has held its eyes in the direction of improving music teaching and stimulating the minds of music teachers, GMTA has survived its first half-century in healthy condition. It has not tried to impose goals that were unattainable, and it has never aspired to be exclusive. The association of teachers with each other, helping each other solve problems which are common to us all and drawing strength from united efforts, gives GMTA a promising future. 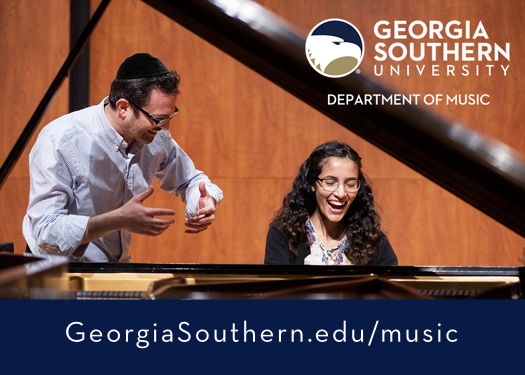